Take only Memories.   Leave only Footprints.    Thank You Very Kindly.

Prairie Burns at Goose Lake Prairie happen in the Spring and Fall of the year.  These are supervised Burns.  To understand why the prairie burns are conducted please read this article. 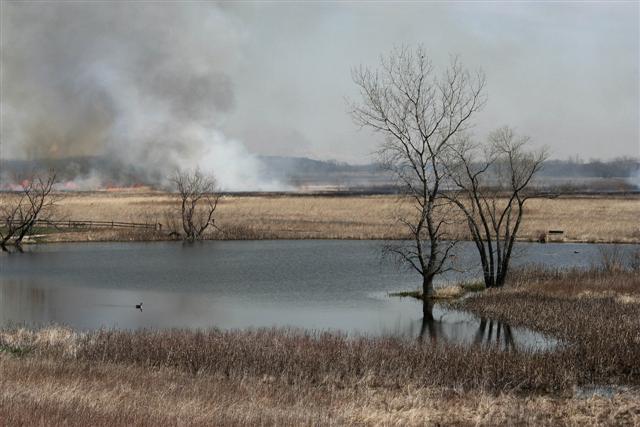 The Cheyenne and other Plains Indians sometimes referred to prairie fires as "red buffalo," in part because the fires roared across the grasslands bringing renewed growth in their wake, The Lakota named the winds after gods who descended from the sky to establish the Four Directions and complete the circle of life. All Plains Indian peoples held the Bison as sacred.

These reverent attitudes grew in part from an intimate understanding of how fire, wind, drought, and grazing animals shape and maintain prairie ecosystems. Without these forces, our grasslands would dwindle in size and become much less varied.

Periodic fires burned throughout the prairie region, blackening hundreds of square miles at a time. In tallgrass prairies, fires raged as fast as 40 miles per hour and sent flames 30 feet or more into the air. Elk and deer scattered before the rolling clouds of black smoke. Herds of Bison and groups of people on horseback could be swallowed up by the conflagration.

Newcomers to the prairie found the fires both frightening and alluring. While canoeing up the Minnesota River in 1847,

George Featherstonhaugh watched a fire burn for days. Before going to my pallet, I made another journey to the upland behind the Fort, to see the prairies on fire. It is a spectacle one in is never tired of looking at: half the horizon appeared like an advancing sea of fire,  with dense clouds of smoke flying towards the moon.

Many fires were started by lightning, especially on the arid during late summer and early fall. A high percentage of fires in the tallgrass region were deliberately set by Plains Indian - to signal, to drive game, to repel the enemy, to create a defensible perimeter around villages, or to encourage growth of new grass that attracted Bison herds. Lewis and Clark commented on the prevalence of smoke and fire in the Missouri River Valley. On March 6, 1805, Lewis wrote, "...a cloudy morning and smoky all day from the burning of the plains of which was set on fire by the Minetarries for an early crop of grass, an inducement for all the Buffalo to feed on."  When these exp1orers wanted to parlay with groups of Indians, they followed the regional custom of igniting the prairie to signal their intentions.

The effects of prairie fires vary depending on time of year, Weather, fire intensity and frequency, and the type and condition of prairie. In tallgrass prairies, fires typically reduce the litter layer, allowing rainfall and nutrients in the ash to quickly enter ground and sunlight to bake the soil. Rhizome and tiller growth of dominant grasses generally increases after a fire. Under certain conditions, particularly in late summer and early fall, fires may lead to greater diversity of native forbs. Frequent spring fires often decrease species diversity, however, by stimulating growth of dominant grasses.

In short grass and mixed-grass prairies, the impacts of periodic fires are less well understood. But virtually all fires in all regions of the prairie kill or damage invading trees and shrubs. Even fire resistant trees such as Quaking Aspen and Bur Oak wither before repeated waves of flame. Vast areas of prairie, from central Nebraska, Kansas, and Oklahoma east to Ohio and Missouri, have become overgrown by trees since fire suppression began during mid-nineteenth century. 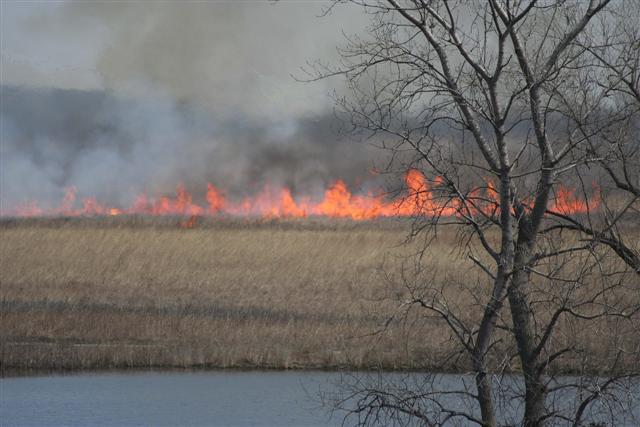 Most prairie grasses are fire-adapted, meaning they evolved with and can benefit from fire. Since grass stems grow from the base rather than from the tip, they recover quickly after being lipped or burned away. In many prairie grasses, the

apical meristem, the point from which cell growth is initiated, is located underground.

Many grasses are long-lived perennials with extensive root systems. Ninety percent or more of their mass may lie underground, insulated from disturbances. In experiments conducted at

Konza Prairie in the Kansas Flint Hills, areas that were periodically burned and grazed produced a higher volume of grasses and forbs over time than did areas that were neither burned nor grazed.

Like fire, wind and drought help to create grasslands and rid them of trees. Because the North American prairie region lies in the center of the continent where major weather systems collide, it experiences some of the most violent weather on Earth. Warm, moist air from the Gulf of Mexico clashes with frigid arctic air and hurricane-force winds sweeping eastward off the Rocky Mountains.  The resulting instability and turbulence cause startling temperature fluctuations and violent storms.

In Spearfish, S.D., weather watchers once recorded a 49 F. temperature rise in just two minute. Bozeman, Montana experienced a 100EF temperature range, from +44 F to -56EF, in 24 hours. A grapefruit-sized hailstone that fell in Kansas weighed 1.67 pounds, a world record, Tornadoes strike with more frequency and fury on the southern plains than anywhere else in the world.

People who live on the prairie learn to make light of weather extremes that would drive others to despair. In "Where the Sky Began", John Madson recounts the tale of a Nebraska farmer who died in retirement in San Diego. They took his remains to a crematorium and baked them for an hour or so. When the furnace door was opened, the farmer stepped out looking healthy and tanned. He wiped some sweat off his face, gazed up at the hazy blue sky, and said, "Sure good to be home again. But by God, another couple of weeks of this and we ain't gonna get a corn crop this year!"

The violent winds that swirl across the grasslands can uproot mature trees and flatten saplings, but the winds' desiccating effect probably causes the most damage to shrubs and trees. Torrid spring and summer winds can suck the soil dry Even the relatively wet tallgrass prairie region experiences a net annual water deficit when you factor in evaporation, much of it caused by scorching winds.  Exposure to intense sunlight and long periods of drought also dry prairie soils.

Grasses are particularly efficient at tapping and retaining moisture. The root systems of Big Bluestem extend as far as 10 feet underground; a cubic meter of Big Bluestem sod may contain more than 20 linear miles of rootlets and root hairs. Leaves of many grasses curl up in hot weather, minimizing exposure to sun and wind. Waxy coating on grass leaves reduces water loss from evaporation. Grasses' pliant yet sturdy stems can withstand the fiercest gales; a wind seems to flow effortlessly through fields of grass, creating a mesmerizing interplay of waves and eddies.

(This in part has been taken from Peterson Field Guide on The North American Prairie) Excerpt from the April 2006 issue of Tallgrass Journal.